Be generous: Invest in acts of charity. Charity yields high returns. Don’t hoard your goods; spread them around. Be a blessing to others. This could be your last night. [Ecclesiastes 11:1-2 (MSG)] 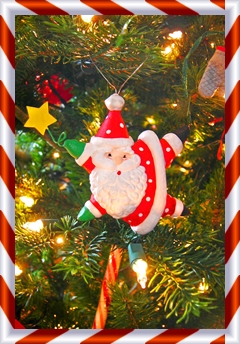 The following is a holiday pass-along story that has made the rounds on the Internet. Years ago, little Jimmy was shocked when his big sister told him there was no Santa. He tearfully went to his grandmother and asked her. Assuring Jimmy that Santa existed and she’d prove it to him, Grandma took him to the local department store. Instead of seeing the store Santa, as Jimmy expected they would, his grandmother gave him $10 and told him to use it to purchase a present for someone who needed one. Alone in the store, the boy pondered who should get a gift and finally decided on Robby, a boy in his classroom. Robby never went out at recess; although he said it was because he wanted to study, everyone knew it was because he didn’t have a warm coat. Jimmy found a brown wool coat, took it to the clerk and asked the price. After telling her he hoped he could afford it since it was a gift for a boy at school who didn’t have a coat, the clerk questioned how much he had. Proudly showing her his ten dollar bill, she told him that was the exactly what the coat cost and bagged it up for him.

Once home, Jimmy’s Grandma removed the price tag, tucked it into her Bible, and helped him box and wrap the coat. That evening the two of them went to Robby’s house. After placing the festively wrapped gift at his front door, they rang the bell and hid behind the bushes. The joy they felt when Robby answered the door and picked up the box convinced Jimmy that Santa did, indeed, exist and that he and his grandmother were on Santa’s team. That little boy is now a grown man and Grandma is gone. When she passed, Jimmy was given her Bible. It was when he found the coat’s $19.95 price tag between its pages that Jimmy realized there had been three on Santa’s team that day.

I remembered that holiday story last month when our church provided fifty-four Christmas shoeboxes for Samaritan’s Purse. Packed with toys, school supplies, books, clothing, hygiene items, and games, these boxes will bless children in over 100 countries around the world. My husband and I were on Santa’s team while roaming through stores picking out things that a nine-year-old boy and a fourteen-year-old girl would like to find in their boxes, when trying to fit everything into the shoe-box size green plastic boxes, when writing short notes to include with the gifts, and when hearing one woman share her experience of being on a mission trip and meeting Christmas box recipients who told her of the great impact those boxes had on their lives and faith.

As you do your Christmas shopping for family and friends in the coming weeks, why not think about getting on Santa’s team and purchasing some items for those less fortunate. In His parable, Jesus told us that He identifies with those in need—the hungry, thirsty, homeless, impoverished, sick and imprisoned—and when we do something for them, we are doing it for Him. On someone’s birthday, it’s traditional to give him a gift so, when we purchase Christmas gifts for the poor and needy, we’re really buying birthday gifts for Jesus!

“I was hungry and you fed me, I was thirsty and you gave me a drink, I was homeless and you gave me a room, I was shivering and you gave me clothes, I was sick and you stopped to visit, I was in prison and you came to me.” Then those ‘sheep’ are going to say, “Master, what are you talking about? When did we ever see you hungry and feed you, thirsty and give you a drink? And when did we ever see you sick or in prison and come to you?” Then the King will say, “I’m telling the solemn truth: Whenever you did one of these things to someone overlooked or ignored, that was me—you did it to me.” [Matthew 25:35-40 (MSG)]