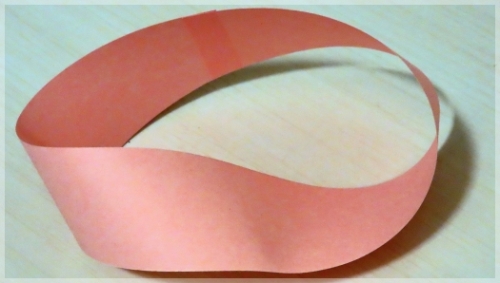 And I will ask the Father, and he will give you another Advocate, who will never leave you. He is the Holy Spirit, who leads into all truth. The world cannot receive him, because it isn’t looking for him and doesn’t recognize him. But you will know him, because he lives with you now and later will be in you. [John 14:16-17 (NLT)]

I tell you the solemn truth, that the doctrine of the Trinity is not so difficult to accept for a working proposition as any one of the axioms of physics. [Henry Brooks Adams]

Writing about our Trinitarian God yesterday, reminded me of the Möebius strip (or band). Ever since my college roommate showed me one, I’ve been fascinated by it. To make one, take a paper strip, give it a single twist and tape the ends together to form a loop. If you draw a line from the seam down the middle of this strip, the line will meet itself back at the same seam but on the other side of the paper. If you continue drawing the line, it then meets at the starting point (and will be twice the length of the strip of paper) without ever needing to lift your pen. This single continuous line shows that the Möebius strip has only one boundary or surface. Imagine an ant crawling in a straight line along the length of that twisted and taped strip. It would return to its starting point having traversed every part of the strip without ever crossing an edge. Basically, something that looks as if it has two sides (and was made by a piece of paper that did), actually has only one surface or side.

If you cut this once-twisted piece of paper down the center line, you’ll end up with one long strip that now has two twists and two surfaces. If you cut that strip again, you end up with two intertwined strips and it just gets more confusing after that! German mathematician August Möbius’ discovery of the oddity in 1858 resulted in the development of a new field of mathematics called topology. While there are all sorts of algebraic and geometric explanations for this simple but remarkable piece of paper, I understand none of them.

Although I see how the Möebius strip could be applied to conveyor belts, continuous-loop recording tapes, and typewriter ribbons, I don’t understand its application in physics, music, engineering, chemistry, or topology. Understanding how it happens, however, isn’t necessary for me to know what happens when I take a strip of paper, give it a single twist, and tape it together!

Even without understanding how God is one in essence but has three united persons in that essence, I know our Triune God exists. Scripture tells us there is only one God and yet it also tells us that God exists in three persons. All three were present at Jesus’ baptism and He spoke of them. Moreover, just as I’ve witnessed the reality of a Möebius strip, I’ve witnessed the reality of the Father, Son, and Holy Spirit as they work in my life. That the concept of one in three and three in one is complex and puzzling doesn’t mean it isn’t real! Even though it’s beyond our understanding, like the Möebius strip, all we have to know is that it’s true!

Jesus came and told his disciples, “I have been given all authority in heaven and on earth. Therefore, go and make disciples of all the nations, baptizing them in the name of the Father and the Son and the Holy Spirit. Teach these new disciples to obey all the commands I have given you. And be sure of this: I am with you always, even to the end of the age.” [Matthew 28:18-20 (NLT)]