COME AS YOU ARE

“Now go out to the street corners and invite everyone you see.” So the servants brought in everyone they could find, good and bad alike, and the banquet hall was filled with guests. [Matthew 22:9-10 (NLT)] 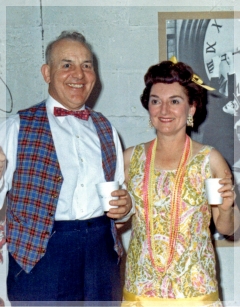 My in-laws were great ones for giving theme parties. When they hosted a “Backwards Party,” guests entered through the back door, wore their clothes backwards (which my mother-in-law admitted made it difficult for the men), and ate dessert before dinner. At another get-together, attendees came dressed as children, received jump ropes and jacks, pulled taffy, and played games like “Mother May I?” and “Pin the Tail on the Donkey.” My introduction to their parties was in 1966 when they turned their house into a Prohibition era speakeasy and guests needed a password to enter. Women dressed as flappers while the men wore fedoras, vests, and spats. Another party had the theme, “Come as You Wish You Had Been.” My mother-in-law, dressed in shorts with a whistle around her neck, came as the PE teacher she once dreamed of becoming and my father-in-law dressed as the train conductor he once aspired to be. Other attendees dressed as ballerinas, weight lifters, princesses, cowboys, or baseball players.

The one theme party they never hosted was “Come as You Are!” After all, no one wants to come as they are. If we can’t be someone else entirely, at least we want to be a better version of ourselves! If I were invited to a “Come as You Are” party, I know I would cheat. I’d change out of my yoga pants, tee, and Crocs into an outfit that would suggest my life is far more exciting than it really is. Then I’d put on make-up, touch up my nails, comb my hair, and spritz on perfume before leaving the house. Yet, “Come as you are!” is exactly how God invites us to come to Him.

We don’t have to be neat, clean or accomplished, nor do we have to repair what’s broken in our lives to accept the invitation to Jesus’ party. Our Lord didn’t invite the elite or influential to be his disciples; He invited twelve ordinary, uneducated, and imperfect men. He knew Peter was impulsive, John and James hot-tempered, Judas flawed, and Matthew a traitorous tax-collector. The woman at the well and the thief on the cross didn’t have to pretend to be anything but the sinners they were and neither do we! The blind, lame, adulterous, afflicted, possessed, soiled and corrupt—they all came to Jesus, not as the innocent children they once were nor as they once wished they could have been, but just as they were. It’s hard to believe that our perfect God could love and accept us, as imperfect and flawed as we are, but He does.

Although we can come to Him as we are, make no mistake about it, we won’t remain that way. We must shed the old us and put on the new in the same way that Saul, the self-righteous Pharisee, did when he became Paul, the Apostle. When we accept Jesus’ invitation to come as we are, He will make of us what we should be.

The church is not a select circle of the immaculate, but a home where the outcast may come in. It is not a palace with gate attendants and challenging sentinels along the entrance-ways holding off at arm’s-length the stranger, but rather a hospital where the broken-hearted may be healed, and where all the weary and troubled may find rest and take counsel together. [James H. Aughey]

Jesus answered them, “Healthy people don’t need a doctor—sick people do. I have come to call not those who think they are righteous, but those who know they are sinners and need to repent.” [Luke 5:31-32 (NLT)]

Put on your new nature, and be renewed as you learn to know your Creator and become like him. In this new life, it doesn’t matter if you are a Jew or a Gentile, circumcised or uncircumcised, barbaric, uncivilized, slave, or free. Christ is all that matters, and he lives in all of us. [Colossians 3:10-11 (NLT)]