No one can serve two masters; for either he will hate the one and love the other, or he will be devoted to the one and despise the other. You cannot serve God and mammon. [Matthew 6:24 (RSV)] 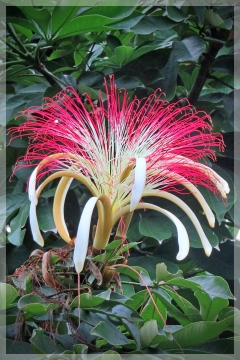 While walking through the botanic garden recently, I looked up to see the showy flowers of the Money Tree (Pachira aquatica). Although the tree is said to bring good fortune and prosperity, no money was hanging from its branches. Nevertheless, its name reminded me of my father’s frequent caution that money didn’t grow on trees! Perhaps it’s because money doesn’t grow on trees that we frequently seem so obsessed by it.

I’ve read claims that Jesus talked about money more than any other topic. His mention of money, however, doesn’t necessarily mean that was His topic. Although the parable’s good Samaritan gave the innkeeper two coins and promised to pay the injured man’s debt, the parable isn’t about money any more than the Hidden Treasure parable is about investing in real estate or the parable of the Loaned Money about loan sharking! Even though Jesus may have mentioned money when speaking, it seems that He was far more interested in the topics of God’s Kingdom, faith, salvation, and forgiveness than money.

Jesus, however, did tell us that we can’t serve two masters—we can’t serve both God and wealth. The word translated as serve was douleuō, which meant to serve as a slave or one in bondage, and the word translated as master was kuriois, which meant one who possesses uncontested power and absolute ownership and authority over another. In Jesus’ world, the slave had no rights and the master had complete control over him. The master owned both the slave and all of the slave’s possessions including every minute of his time!

Because Jesus’ words make it clear He was speaking of servitude, we mustn’t make the mistake of substituting “work” for douleuō or “employer” for kuriois. For example, as a consultant, my daughter works for several employers at once. Unlike a slave, however, she is free to pick and choose for whom she works and how she divides her time between them. One who serves a master, however, has no such choice because a master demands total commitment and allegiance.

The two masters of which Jesus was speaking are God and mammon (often translated as money or wealth). Nowadays, mammon has the negative connotation of filthy riches or ill-gotten gains but, to Jesus’ listeners, it didn’t. The word used was mamōna, a neutral word encompassing money, possessions, property, earnings, and riches of all kinds. The rabbis even had a saying, “Let the mammon of thy neighbor be as dear to thee as thine own,” which meant we should care for others’ possessions as carefully as our own. Like many things in life, mammon is neither inherently good or bad; how it is regarded and used is what makes it good or bad. Rather than saying wealth is inherently evil, Jesus is telling us that we can’t serve both wealth and God; at some point, the two masters’ interests will diverge.

There is nothing wrong with having a home, car, job, business, fine jewelry, or investment accounts—what is wrong is allowing any of those things (or the desire for them) to own us! We can enjoy them as long as we understand that God alone is our master and all of our possessions and time belong to Him. Although He’s loaned them to us for the time being, we are to serve God with them. When we set our hearts on money or things, however, we’re serving another master. We must never crave wealth more than we desire God, put our trust in money rather Him, love possessions more than we love Him, or choose to serve mammon rather than serve God. We cannot claim Jesus as Lord if our allegiance is to anything or anyone other than Him. He, alone, is our master and He is the one we serve!

Money is in some respects life’s fire: it is a very excellent servant, but a terrible master. [P. T. Barnum]