Instead, clothe yourself with the presence of the Lord Jesus Christ. And don’t let yourself think about ways to indulge your evil desires. [Romans 13:14 (NLT)] 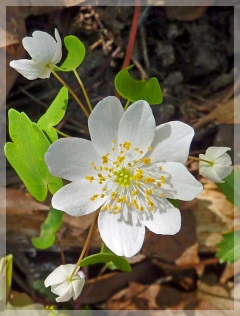 Because of the Jewish prohibitions about images, I understand why no pictures of Jesus were drawn by His followers. Nevertheless, any decent author gives a minimal word picture of his characters but the gospels’ writers give us nothing. With Melville’s description of Captain Ahab’s gray hair, scarred face, and whale-bone peg-leg, we know more about the fictional whale hunter’s looks than we do about the real Jesus! The most we know about His exterior is found in Isaiah’s prophecy: “There was nothing beautiful or majestic about his appearance, nothing to attract us to him,” [53:2] which describes most of us! Adjectives are few and far between in Scripture but the Bible isn’t a novel and its words were God-breathed not writer created. If God wanted us to know about Jesus’s appearance, He would have told us. After all, if we knew what Jesus looked like, wouldn’t we focus more on His looks rather than His words? Rather than wanting to emulate His character, we’d probably want to match His features—after all, He was God!

When Paul told the Romans to “put on” or clothe themselves with Christ, he wasn’t speaking of robes, sandals, beard or haircut. He was speaking of spiritual clothing—to take off our “dark deeds like dirty clothes, and put on the shining armor of right living.“ [13:12] While we know nothing of Jesus’ physical appearance, the New Testament writers gave us more than enough description of Jesus’ words and behavior to clearly picture the “shining armor of right living.” When we put on Christ, our minds and behavior transform so that our lives imitate His—so that, when people see us, they should see Him.

Below is an excerpt from the Epistle to Diognetus. While not part of the Christian canon, it is a valuable document. Written around 130 AD, the author calls himself Mathetes (meaning “disciple” in Greek) and claims to be a student of the apostles. Yesterday, I wrote of the misconceptions surrounding the early followers of Jesus. In Mathetes’ letter, he defends the doctrines of Christianity and describes Christian behavior to the “most excellent Diognetus.” In one chapter, Mathetes explains that, while Christians follow the ordinary customs of clothing, food and conduct, “they display to us their wonderful and confessedly striking method of life.” The lifestyle to which Jesus calls us has not changed since Mathetes’ time and yet, when reading his words, I wonder if anyone would describe today’s followers of Christ in the same way.

They dwell in their own countries, but simply as sojourners. As citizens, they share in all things with others, and yet endure all things as if foreigners. Every foreign land is to them as their native country, and every land of their birth as a land of strangers. They marry, as do all [others]; they beget children; but they do not destroy their offspring. They have a common table, but not a common bed. They are in the flesh, but they do not live after the flesh. They pass their days on earth, but they are citizens of heaven. They obey the prescribed laws, and at the same time surpass the laws by their lives. They love all men, and are persecuted by all. They are unknown and condemned; they are put to death, and restored to life. They are poor, yet make many rich; they are in lack of all things, and yet abound in all; they are dishonoured, and yet in their very dishonour are glorified. They are evil spoken of, and yet are justified; they are reviled, and bless; they are insulted, and repay the insult with honour; they do good, yet are punished as evil-doers. When punished, they rejoice as if quickened into life; they are assailed by the Jews as foreigners, and are persecuted by the Greeks; yet those who hate them are unable to assign any reason for their hatred.

Put on your new nature, and be renewed as you learn to know your Creator and become like him. [Colossians 3:10 (NLT)]

Put on your new nature, created to be like God—truly righteous and holy. [Ephesians 4:24 (NLT)]