NOT SEEING THE CAMELS FOR THE GNATS

What sorrow awaits you teachers of religious law and you Pharisees. Hypocrites! For you are careful to tithe even the tiniest income from your herb gardens, but you ignore the more important aspects of the law—justice, mercy, and faith. You should tithe, yes, but do not neglect the more important things. Blind guides! You strain your water so you won’t accidentally swallow a gnat, but you swallow a camel! [Matthew 23:23-24 (NLT)] 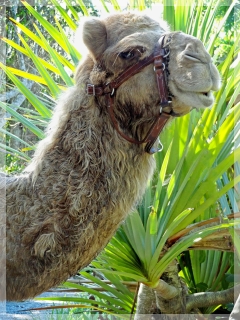 Jesus criticized the Pharisees for their meticulous tithing of herbs and spices while missing the more important aspects of the law. While both gnats and camels were forbidden food, in a wonderfully graphic hyperbole, He compared the way they poured their wine through a strainer to avoid accidentally swallowing a gnat (the smallest of prohibited “unclean” animals) while actually swallowing a camel (the largest)! Feeling self-righteous over their adherence to minor details, the Pharisees entirely missed the foundational principles of the Law: loving God and loving others.

Although the law demanded the tithing of produce, the Pharisees in Jesus day debated whether that applied to all the herbs and spices. One group determined it didn’t apply to black cumin but, in later years, the tithing of cumin was again required when the tithing of mint wasn’t. While this seems much ado about nothing, I’m not sure we’re that much different from the Pharisees. We’re probably not splitting hairs about herbs or accidentally ingesting a gnat, but it’s easy to become fixated on the details (tithing, attire, drinking, church attendance, rituals, sex, smoking) while missing the bigger issues like materialism, impatience, anger, pride, selfishness, callousness, lust, duplicity, and prejudice as well as justice, mercy, and faith. If we haven’t neglected church attendance, committed adultery, murdered anyone, robbed a bank, pummeled someone with our fists, or watched porn, we feel complacent and self-righteous. Like the Pharisees, we might not be doing the wrong things, but are we putting into practice the right ones?

It is in Christ’s character that we find the Christian virtues: things like humility, wisdom, self-control, courage, perseverance, patience, peace, joy, self-denial, gentleness, compassion, moderation, kindness, mercy, goodness, integrity, faithfulness, and love. Noting that “things will go swimmingly” for the first week, C.S. Lewis suggested making a serious attempt to practice the Christian virtues for at least six weeks. By then, he noted, we’ll have taken “the first step toward true humility” and discovered some rather unpleasant truths about ourselves. “No one knows how bad he is,” said Lewis, “until he has tried very hard to be good.”

It didn’t cost the Pharisees much to strain out a gnat or tithe their herbs and it doesn’t cost us much to obey the letter of the law. Justice, mercy, and faith, however, came at a cost to the Pharisees as the Christian virtues do to us. What good was it for the Pharisee to tithe his dill to the priests but refuse a crumb to the destitute leper begging at the temple steps? What good is it for us to donate ten percent of our money when we won’t give ten minutes of our time to someone in need? Putting into practice Christian virtues is a great deal more difficult than putting ourselves into a pew in a Christian church.

Because they were more concerned about appearing pious than actually being men of virtue and integrity, Jesus continued his denunciation of the Pharisees by comparing them to a cup that is clean on the outside but filthy inside! Like the Pharisees, it’s much easier to avoid scandalous sins – to appear righteous to our neighbors – than to actually be godly people – to be clean both on the outside and inside! Just a week of consciously practicing Christian virtues can be humbling; that’s all it took for me to realize how dirty my cup actually is!

Now is the hour we should humbly prostrate ourselves before God, willing to be convicted afresh of our sins by the Holy Spirit. [Watchman Nee]