HE DIDN’T HAVE TO TAKE IT! – Easter Monday

When the devil had finished tempting Jesus, he left him until the next opportunity came. [Luke 4:13 (NLT)] 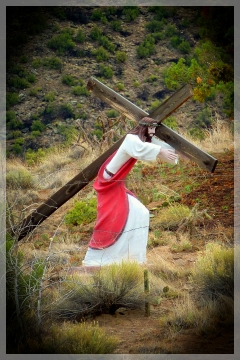 When asked about the temptation of Christ, we probably think of Satan’s three temptations in the wilderness. Since the gospels don’t mention other specific temptations, it’s easy to think that Jesus, unlike the rest of us, was only tempted three times. “He left him until the next opportunity came,” wrote Luke and, while reading the four gospel accounts of the crucifixion during Holy Week, I know He had to have been sorely tempted that awful last day. Right up to the end, Satan must have been at His side, whispering into his ear and reminding Him that He didn’t have to take the abuse—after all, He was God!

Satan just was warming up with his temptations during Christ’s forty days in the wilderness. When Jesus prayed so hard He sweat blood in Gethsemane, that wasn’t because He was afraid to suffer and die. That was Jesus resisting Satan as the enemy made false promises, cast doubt on His mission, and tried to keep Him from the cross.

I can’t believe Satan went down without a fight and it was in the hours following Jesus’s arrest that he must have made a determined last ditch effort to thwart God’s plan of salvation. It may have been a man’s body suffering the unspeakable abuse that horrifying Friday but, inside the bruised and bloody flesh, it was God! He’d fed a multitude with a few scraps, turned water into wine, cast out demons, healed lepers, and stilled a storm. Jesus didn’t lose His power when He was arrested; He deliberately chose not to use it!

When Jesus was wrongly accused and false witnesses testified before the high court, when the people who’d hailed Him just a few days earlier called to crucify him, or when the crowd ridiculed Him as His tortured body hung on the cross, could the One capable of giving hearing to the deaf been tempted to strike them all mute? Jesus was there when an angel of the Lord killed 185,000 Assyrian soldiers outside of Jerusalem’s walls. As He was being spit on, slapped, beaten with fists, hit on the head with a reed stick, flogged with a lead-tipped whip, and mocked with a crown of sharp thorns, surely Satan invited Jesus to do something similar to His taunters and abusers. Could the One who gave sight to the blind have been tempted to take away the sight of the soldiers as they gambled for his robe or knelt in mock worship? As they nailed His hands to the cross, could the One who’d cast demons into swine been tempted to kill the men who were torturing Him? Jesus was God. He existed before time, space, matter and energy began and, up to His very last breath, the One who could walk on water could have freed Himself, stepped off that cross, healed his wounds, and destroyed every last one of the soldiers and onlookers with just a thought. But, He didn’t!

Perhaps it was my familiarity with the crucifixion story (and the fact that I know the good news that follows) but I don’t think I truly grasped the anguish of Christ until I read all four gospel accounts in one sitting. I knew He suffered a gruesome tortuous death but I didn’t see how tempting it would have been for Him not to do so! Perhaps resisting the temptation to quit and punish His abusers was even harder than enduring the pain of the cross.

How long would you hold your hand over a burning flame when all you had to do was pull it out of the fire? Would you do it for people who reviled and berated you? Jesus didn’t have to suffer and die for us; He chose to do so out of love. I, for one, can’t comprehend a love that great! Thank you, Jesus!

He personally carried our sins in his body on the cross so that we can be dead to sin and live for what is right. By his wounds you are healed. [1 Peter 2:24 (NLT)]