Again and again the Lord had sent his prophets and seers to warn both Israel and Judah: “Turn from all your evil ways. Obey my commands and decrees—the entire law that I commanded your ancestors to obey, and that I gave you through my servants the prophets.” But the Israelites would not listen. They were as stubborn as their ancestors who had refused to believe in the Lord their God. [2 Kings 17:13-14 (NLT)] 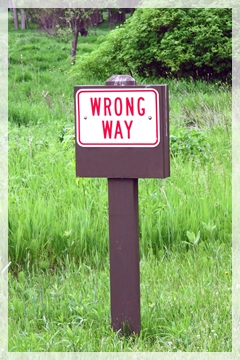 We were at the symphony watching Alfred Hitchcock’s Psycho while the orchestra played Bernard Herrman’s chilling soundtrack. When Janet Leigh’s character, Marion Crane, stepped into the shower, a man in the audience yelled, ”Don’t do it!” Since most of us saw the movie decades ago, we didn’t want her to take that fatal shower either. In spite of the warning, however, she did. Since Marion was at the Bates Motel because she’d embezzled $40,000 from her boss, perhaps that man should have yelled, “Don’t do it!” much sooner.

That’s sort of what it was like when rereading the books of Kings and Chronicles recently. I knew they would end badly for both Israel and Judah but there was nothing I could do about it. I didn’t want to read their sad history again any more than I wanted to see Marion Crane die in the shower a second time. But, just as I made it through the gruesome movie murder, I made it through the disheartening saga of God’s chosen people.

No one warned Marion about Norman Bates but the people of Judah and Israel got plenty of warnings from God. The prophets Amos and Hosea told the northern kingdom they’d be taken captive by the Assyrians and both kingdoms were warned of their tragic ends by Micah. Joel and Isaiah warned Judah to turn from their idolatry and sins. Habakkuk warned them that the Babylonians would be used as an instrument of judgment and Zephaniah and Jeremiah predicted the destruction of Jerusalem. God’s chosen people couldn’t claim they weren’t warned. In fact, the warnings are found as far back as Deuteronomy when God made clear the cost of disobedience.

Scripture warns us to repent, resist the enemy, be morally alert and obedient, and not to be misled by false teachers. It warns of persecution and the dangers of lust, drifting away, prejudice, hypocrisy, and God’s impending judgment. Romans 6:23 puts it bluntly: “For the wages of sin is death, but the free gift of God is eternal life through Christ Jesus our Lord.” Like the people of Israel and Judah, we can’t say we weren’t warned.

Be careful that you do not refuse to listen to the One who is speaking. For if the people of Israel did not escape when they refused to listen to Moses, the earthly messenger, we will certainly not escape if we reject the One who speaks to us from heaven! [Hebrews 12:25 (NLT)]