THE REASON FOR MORE THAN A SEASON 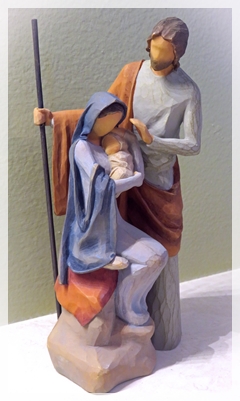 Although Epiphany celebrates the magi’s visit to the Christ child, for many people it simply marks the official end to the holiday season. It’s the day the tree goes down, lights are removed, and nativity scenes get stowed for another year. British tradition holds that if you haven’t removed the holiday décor by January 6, you must leave it in place all year long to avoid misfortune. I don’t know about misfortune but, in our community, you’ll face a fine if holiday lights or decorations remain after this week!

This year, my five-year old grand helped me take down the tree and put away the Christmas decorations. Along with the ornaments, candle holders, stockings, and two Santas, we put away four nativity sets. As the little guy placed the Christ child in one of the boxes, he asked me why I had so many figures of baby Jesus. I reminded him that Jesus (not Santa) is the reason for the season and that we always want to keep Christ in Christmas.

After everything Christmas was packed up and put away, I realized a small resin figurine of the Holy Family remained on a shelf in the living room. The crates in the garage were filled to the brim and, just as on that first Christmas, there was no room anywhere for Mary, Joseph and the newborn King. Rather than having them spend the next eleven months in a high cabinet with assorted vases, I decided to keep them on my desk.

That figurine will serve as a reminder of how God deliberately chose to humble Himself: to be born of woman and live as a mortal man. That was God Himself who entered our world through a birth canal amidst blood and amniotic fluid. The baby who nursed at Mary’s breast and peed, pooped, spit up and drooled was God! He who created man was so helpless He couldn’t even roll over for the first few months of His life and had to learn to crawl and walk. The God who gave mankind the gift of speech had to learn to speak, the One who invented numbers had to learn to count, and He who spoke the law to Moses had to learn how to read His own words! The God who spoke light into existence had to light a candle at night and our omnipresent God had to walk to get from one place to another. The God who never gets tired, thirsty or hungry became a man who did. Jesus humbled Himself by living as a man and endured everything mankind does: blisters, bruises, colds, waiting, toothaches, bug bites, stubbed toes, hangnails, exhaustion, sunburn, skinned knees, and probably diarrhea. He even endured temptation but, unlike us, He remained sinless!

Sometimes, it’s easy to forget the human part of Jesus: that our infinite God chose to live in a finite world with all of its limitations. That figurine will remain on my desk this year as a reminder that our invincible and invulnerable God freely chose to live as a man so that He could die as a man in my place. Fully man and fully God at the same time, Jesus is more than just the reason for the Christmas season; He is the reason for our salvation. Christ belongs in far more than Christmas; He belongs in everything we think, say and do.

Therefore, it was necessary for him to be made in every respect like us, his brothers and sisters, so that he could be our merciful and faithful High Priest before God. Then he could offer a sacrifice that would take away the sins of the people.  Since he himself has gone through suffering and testing, he is able to help us when we are being tested. [Hebrews 2:17-18 (NLT)]