This is what the Lord says: “Cursed are those who put their trust in mere humans, who rely on human strength and turn their hearts away from the Lord. They are like stunted shrubs in the desert, with no hope for the future.” [Jeremiah 17:5-6 (NLT)] 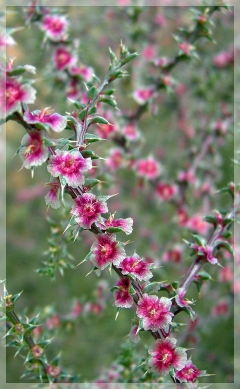 Because Judah had trusted in false gods and foreign alliances rather than God, Jeremiah pronounced God’s judgment on the southern kingdom. After saying their sins were as if they’d been etched on their stony hearts with a diamond-pointed iron chisel, he compared them to a stunted shrub. That shrub may have been the tumble thistle, a common plant found in Israel’s grasslands. I’ve never been to Israel but I’ve seen a similar plant in the western states: the Russian thistle, commonly known as tumbleweed or wind witch. Both kinds of weeds begin with flowers on a spiny plant. As their seeds mature, the entire plant dries and breaks from its roots at the soil surface. Shaped like a ball and rootless, the wind blows and rolls these plant “skeletons” across the prairie.

In stark contrast to a stunted shrub, Jeremiah likened those who trust in the Lord to deep-rooted trees planted by the riverbank—trees untroubled by heat or drought. I’m reminded of our hardy American cottonwoods found near rivers, lakes, and irrigation ditches throughout the nation. The fastest growing trees in North America, cottonwoods can grow to over 100-feet tall, with a trunk diameter of 6-feet, and a leaf canopy over 75-feet wide. Instead of being blown by the wind like tumbleweed, the cottonwood’s size makes it an excellent windbreak. When we trust in ourselves and false gods, we’ll be blown every which way like a tumbleweed but, when we trust in God, we can withstand life’s headwinds like a cottonwood.

Growing on the water’s edge, cottonwoods typically survive adverse conditions and prairie fires. Few plants can survive the scorching heat, scant rainfall, relentless winds, blowing sand and poor soil of New Mexico’s White Sands National Monument but the deeply rooted Rio Grande cottonwood thrives there! When we trust in God and sink our roots deep in His word, like the cottonwood, we will flourish and have a full life, even in harsh conditions.

Dubbed “the pioneer tree,” the cottonwood was a welcome sight for settlers crossing the plains because it meant shade from the heat, fuel for a fire, and a source of water. Those same settlers considered tumbleweeds a menace. They leeched nutrients from the soil, crowded out forage grass and, being highly flammable when dry, could become flying fireballs and spread a grass fire. Just as pioneers found refuge in the cottonwood, those who trust in the Lord find refuge in Him. Those who trust only in man are as worthless as a noxious weed and as dangerous as burning tumbleweed.

When we put our trust in man, false gods, or empty ideologies, we’re no different than a tumbleweed: dry and rootless, rolling in whatever direction the wind is blowing, and with no hope for the future. When we trust in the Lord, we’re like the cottonwood: deeply rooted in His word, fed by His living water, and able to survive, even thrive, in the bleakest of situations.

But blessed are those who trust in the Lord and have made the Lord their hope and confidence. They are like trees planted along a riverbank, with roots that reach deep into the water. Such trees are not bothered by the heat or worried by long months of drought. Their leaves stay green, and they never stop producing fruit. [Jeremiah 17:7-8 (NLT)]