The people who walk in darkness will see a great light. For those who live in a land of deep darkness, a light will shine. [Isaiah 9:2 (NLT)]

Jesus spoke to the people once more and said, “I am the light of the world. If you follow me, you won’t have to walk in darkness, because you will have the light that leads to life.” [John 8:12 (NLT)] 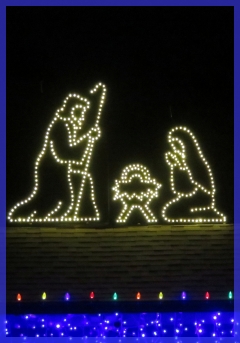 Two nights ago, we joined a long line of vehicles slowly wending their way through a nearby neighborhood famed for its over-the-top holiday light display. Each street follows a theme and over 300 homes are brightly decorated. The streets were aglow with meteor shower, icicle, garland, fairy, net, star, blinking, ball and laser lights along with illuminated blow molds, inflatables, and cut-outs of everything from Santa exiting an outhouse to the Grinch, igloos to elves, and candy canes to Olaf and the Minions. As bright as that neighborhood’s display was, it pales in comparison to one done by the Gay family in Lagrangeville, NY. Holders of the Guinness world record for holiday lights on a residential property, their 2020 display uses more than 670,000 lights that are choreographed to 256 songs.

The first holiday light display was in 1882 when Edward Hibberd Johnson, an associate of Thomas Edison, hand-wired and strung together 80 red, white and blue light bulbs and placed them on a tree. After connecting them to a power generator, he set the tree on a rotating pedestal in his parlor window where the brightly lit revolving tree drew a crowd of admirers. Even though electricity was not readily available, as Edison’s partner in the Edison Lamp Company (makers of light bulbs), Johnson was more a promoter of electricity and light bulbs than the spirit of Christmas. Nevertheless, by 1894, the tradition of Christmas lights was firmly established when the White House Christmas tree was illuminated by 120 bulbs. Today, in the U.S., about 150 million light sets are sold every year and some 80 million homes display Christmas lights.

Last night, we again joined a long line of vehicles and drove through another holiday display. While less extravagant, this show was more meaningful. From the safety of our cars in a darkened church parking lot, we visited 1st century Nazareth and Bethlehem. Starting with the angel Gabriel’s visit to Mary, we saw the Christmas story unfold in several live scenes while the relevant Bible verses were broadcast from a small speaker by each display. Rather than plastic reindeer or inflated snowmen, we saw real donkeys, camels, and sheep along with people portraying the holy family, angels, shepherds, and wise men.

While nowhere near as impressive as the previous night’s extravaganza, this simple representation of the Christmas story was a reminder that Jesus wasn’t flashy or brash. Even thought He was God, His birth was barely acknowledged. Although a star marked the event, only pagan astrologers noticed and, even though a host of angels made His birth announcement, only shepherds heard them. Rather than thousands of people coming to admire a spectacular display of lights, only lowly shepherds and sheep gazed in wonder as the light of the world lay in a manger.

Amid the season’s frenzied shopping, gaily wrapped presents, holiday music, cookies, cards, ugly sweaters, trimmed trees, elves on shelves, Santas, and all of those bright lights and decorations, let’s not forget that Jesus is the reason for the season. To be more specific, Good Friday is the reason for Christmas! The reason God took on the flesh of man and was born of woman was so He could die—something He couldn’t do as God. Jesus became man so that, by dying, He could take away the sins of the world.

When we see the festive lights of this season, let us remember that the real light of the world has nothing to do with LEDs, bulbs, generators, kilowatts, electricity, or even the sun. The light of the world comes from the Son who came to us as a baby in a small Judean village.

The Word gave life to everything that was created, and his life brought light to everyone. The light shines in the darkness, and the darkness can never extinguish it. [John 1:4-5 (NLT)]