You see, my dear family, we don’t want to keep you in the dark about the suffering we went through in Asia. The load we had to carry was far too heavy for us; it got to the point where we gave up on life itself. Yes: deep inside ourselves we received the death sentence. This was to stop us relying on ourselves, and to make us rely on the God who raises the dead. He rescued us from such a great and deadly peril, and he’ll do it again; we have placed our hope in him, that he’ll do it again! [2 Corinthians 1:8-11 (NTE)] 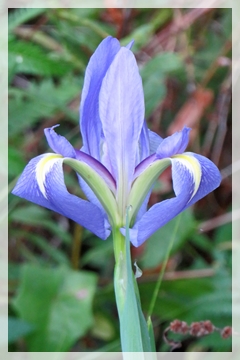 I know I’m not invulnerable but I never thought of myself as particularly vulnerable until now. Since I am well over 65, I am officially vulnerable to COVID-19, as is my husband; that knowledge, along with the terrible toll being taken by this pandemic, has put me on edge. Knowing that it is just a matter of time before someone I love is taken down by this virus has unnerved me. That my prayer list is lengthening by the day doesn’t make it any easier. Before this, I rarely had been apprehensive about my health or that of my family, uneasy about our finances, or concerned about the family business. I’ve endured my share of trials, sorrow, illness, and uncertainty but this combination of circumstances is the “perfect storm” that has shaken me to my core.

As I prayed reassuring Bible verses this morning, I realized how much easier it is to talk the talk than actually walk the walk. I wondered if the Apostle Paul ever was shaken by circumstances. Throughout his ministry, he suffered trials and persecution. He was stoned, imprisoned, shipwrecked, beaten, betrayed, and abandoned and yet it seems as if God’s abundant grace sustained him throughout his life. In 2 Corinthians, Paul tells of a time he felt unbearably crushed by circumstances, so much so that he thought he’d die. As he came to realize his powerlessness, however, he stopped relying on himself and came to trust and depend on God. Delivered by God from whatever the trial was, Paul boldly stated that God would deliver him again.

Jumping ahead another ten years, however, we find Paul in a Roman prison. A few years earlier, he’d been released from his first Roman imprisonment (a house arrest) but now he was sitting in Rome’s Mamertine dungeon. Although he’d escaped a death sentence at his preliminary hearing, he fully expected to be found guilty at his final trial. Knowing his execution was imminent, there was no bold statement that God would deliver him. Nevertheless, in 2 Timothy, we don’t read the words of a man who is afraid or anxious; they are the words of a man who trusts God and lives by faith rather than sight. They are the words of a man who is calmly facing his future, whatever that may be, with confidence that God will bring him safely into His kingdom.

Rather than saying, “No!” to God, we see Paul saying an enthusiastic “Yes!” to all that will happen, whatever that may be. Like Paul, we must learn to rely solely on God and release our fears and anxiety to Him. To really do that, however, we also have to release our future – our hopes and dreams – to Him, as well. Let us trust in God: that He will give us the strength to endure whatever the future holds and that, in the end, He will bring us safely into His kingdom!

How to get through this? My prayer will be the words of former U.N. Secretary General Dag Hammarskjöld: “For all that has been, Thanks. To all that shall be, Yes.”

For I am already being poured out as a drink-offering; my departure time has arrived. I have fought the good fight; I have completed the course; I have kept the faith. What do I still have to look for? The crown of righteousness! The Lord, the righteous judge, will give it to me as my reward on that day – and not only to me, but also to all who have loved his appearing. … The Lord will snatch me clear from every wicked deed and will save me for his heavenly kingdom. Glory to him for the ages of ages, Amen! [2 Timothy 4:6-8,18 (NTE)]