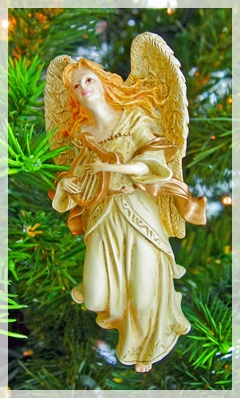 It’s no wonder that the angel Gabriel told Mary not to be afraid. Angels were not an everyday occurrence and, when they arrived, lives were changed. As God’s messengers, angels sometimes brought good news, offered protection, or comforted people, but they also brought warnings and executed God’s judgment. Although angels rescued Lot, they also warned of Sodom’s destruction! Balaam received a stern warning from a sword-bearing angel, David wrote of destroying angels, and 2 Samuel tells of an angel nearly destroying Jerusalem. Mary’s initial confusion and concern at seeing an angel is understandable. When reassuring the girl, Gabriel tells her she is “highly favored” by God; he’s not brought bad news, but good. Nevertheless, she knows her life is going to change; she just doesn’t know how!

Gabriel then tells Mary in what way she’s found favor—by giving birth to a child named Jesus who will fulfill the promises of Scripture. I don’t think Mary fully understood the ramification of Gabriel’s words simply because she was stuck on the “How?” of his words. When the angel told Zechariah of Elizabeth’s pregnancy, the priest questioned out of disbelief saying that he and Elizabeth were too old. Mary, however, didn’t question whether God could do such a thing; she just asked how He would do it. That it would be a miracle through the Holy Spirit was all she needed to know! Calling herself the Lord’s servant, she immediately acquiesced to His will.

Mary’s answer is one of amazing faith. Unlike Moses, she didn’t list her weaknesses or the problems facing her and unlike Jonah, she didn’t run in the opposite direction. Although the angel encouraged Mary by telling her of Elizabeth’s pregnancy, Mary never asked for proof as did Gideon. Mary’s faithful response is that of highest obedience to God.

We know the rest of the story; Mary did not. She didn’t know how Joseph or her parents would react, where God’s plan would lead, or what would be demanded of her in the future. Trusting that the Lord would work out the details, she simply walked forward in faith. When God gives us a task, are we as obedient as Mary? We should be!

There’s some task which the God of all the universe, the great Creator, your redeemer in Jesus Christ has for you to do, and which will remain undone and incomplete until by faith and obedience you step into the will of God. [Alan Redpath]

Mary responded, “I am the Lord’s servant. May everything you have said about me come true.” And then the angel left her. [Luke 1:38 (NLT)]