For there are many unruly and vain talkers and deceivers…Whose mouths must be stopped, who subvert whole houses, teaching things which they ought not, for filthy lucre’s sake. [Titus 1:10-11 (KJV)] 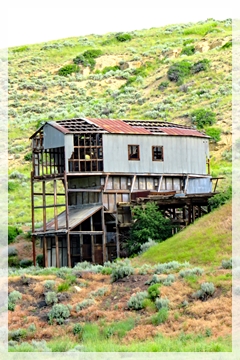 Demas was a fellow worker of Paul’s during his ministry but, during Paul’s second imprisonment in Rome, Demas left abruptly. Paul wrote Timothy that Demas had deserted him because he loved the good things of the world. How sad it had to have been for Paul to write that he’d been forsaken by one of the men he’d trained, a man with whom he ministered, a man he loved. We don’t know if Demas forsook the Lord along with Paul or whether the worldly things he loved in life were fortune, fame, or flesh. Nowhere in Scripture do read any more of Demas or if he ever returned to the faith.

In John Bunyan’s The Pilgrim’s Progress, Christian and his companion Hopeful come to a hill called Lucre where they encounter Demas. Not a word we use nowadays, “lucre” is a Middle English word for money and both the King James Version of the Bible and Bunyan’s allegory were written in Middle English.

On Lucre hill, and just a little off the Way, is a silver mine. The ground around the mine is quite unstable (Bunyan calls it “deceitful”) and often collapses, causing severe injury or death to anyone who’s ventured too close. Calling to the Pilgrims and inviting them to step off the path is Demas. He promises that, with a little effort, they’ll become rich. Whether it’s merely curiosity or the lure of earthly treasures, Hopeful is tempted to step out of the Way but Christian cautions him. The Pilgrim asks Demas about the danger and whether the stop might hinder people on their pilgrimages. Although Demas assures them it’s not very dangerous if one is careful, his blush gives away the deceit in his answer.

Although Christian calls him an enemy of the Lord of the Way, Demas claims to be one of their comrades. Christian knows better and says Demas is the great-grandson of Gehazi [2 Kings 5:20-24] and the son of Judas [Matthew 26:14-15]: both men who betrayed the Lord for money. As Christian and Hopeful go on their way, other Pilgrims heed Demas’ call and disappear into the pit.

Christian and Hopeful then see a strange monument beside the Highway that looks much like a woman. Its sign reads: “Remember Lot’s wife!” They realize it is the pillar of salt that once was the woman who looked back at Sodom with a “covetous heart.” That she escaped one judgment (Sodom) only to be destroyed by another was a lesson not lost on the men. Serving as both a caution about sin and an example of God’s judgment, the monument stands in sight of Demas and the Pilgrims who prefer earthly treasures to the Way. Those tempted by Lucre’s promise could see the monument’s reminder if only they’d lift their eyes!

As others did before him and more have done after, Demas lost his way because of the allure of lucre. Bunyan’s lesson is clear: the lure of riches can lead us to a slippery and deceitful slope. Don’t venture too close or you may plunge into the depths! Run from sin and don’t turn back. Heed God’s warnings and “always remember Lot’s wife!”

Love not the world, neither the things that are in the world. If any man love the world, the love of the Father is not in him. [1 John 2:15 (KJV)]