How great is our Lord! His power is absolute! His understanding is beyond comprehension! [Psalm 147:5 (NLT)]

Trust in the Lord with all your heart; do not depend on your own understanding. [Proverbs 3:5 (NLT)] 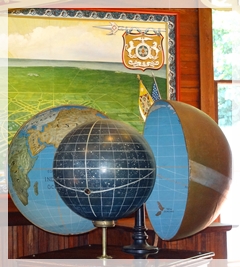 Just north of us is a state park that once was home to a group called the Koreshan Unity. In 1894, Dr. Cyrus Teed, known as the Prophet Koresh, brought about 250 of his followers to the banks of the Estero River where they hoped to establish a “New Jerusalem.” The Koreshans believed that the Bible needed prophets to interpret it and that Teed was the seventh in a line of biblical prophets. As the designated prophet, Teed would reveal everything about the universe that Jesus failed to explain. Taking verses out of context from both testaments of the Bible, the Koreshans believed in reincarnation, communal living, heaven and hell, immortality, and celibacy.

The most curious belief of the Koreshans was that of Cellular Cosmogony: that the earth is a hollow shell about 8,000 miles in diameter and that the entire universe exists on the inside of this shell. Although the earth’s surface appears convex, Teed claimed that was an optical illusion and the earth’s surface actually was concave. Picture a globe but, instead of having the land and sea on the outer side, they are on the inner side; instead of life existing on the outer surface, it exists on the inside of the shell. The universe rotates inside the earth’s shell rather than the earth rotating in the universe and the sun is a giant electromagnetic battery in the middle of the sphere. Rather than gravity, centrifugal force is what holds us down.

Teed felt that God had revealed to the first six prophets (Adam, Enoch, Noah, Moses, Abraham, and Jesus) only what they (and their followers) were capable of understanding. As the most evolved of the prophets, Teed believed that God would reveal everything to him and, once God had done so, Teed would then usher in the age of Koreshanity.

For Teed, living on the inside of a hollow sphere meant that the universe and everything in it was knowable and finite—all wrapped up in a hollow sphere. Pictures of the earth from space easily tell us his Cellular Cosmogony is wrong and Scripture tells us he was in error with his theology—Jesus had the last word, not Teed! His biggest mistake may have been the same one we often make ourselves: wanting the world and God to be limited, explainable, and understandable.

Although Jesus and Scripture have given us all we need to know, there still remains much that we’ve not been told or that we’ll never understand about God, our existence, eternity, and the universe. None of us truly comprehend how God could speak the universe into existence, can know what we want before we know it ourselves, or see our yesterdays, todays, and tomorrows all at the same time. No prophet can give us a satisfactory explanation as to why bad things happen to good people or evil people prosper while the righteous suffer. How can we possibly truly understand God’s grace, His unlimited love for us, or how God can be one Being containing three persons while remaining only one God? That God is infinite, having neither beginning nor end, is mind boggling!

A universe that is contained in a shell would be far less baffling than one that is continually expanding and infinite in scope! We all want to think that God is understandable, life makes sense and everything is explainable but it isn’t. In spite of Scripture (and even science), there is much that remains incomprehensible and will remain that way during our lifetimes. Teed tried to limit God and His creation to make the inexplicable explainable. God and our existence, however, can’t be nicely wrapped up in a neat package or a closed universe. The good thing for us is that, while fully understanding God may be impossible, knowing, trusting and loving Him is not!

Oh, how great are God’s riches and wisdom and knowledge! How impossible it is for us to understand his decisions and his ways! … For everything comes from him and exists by his power and is intended for his glory. All glory to him forever! Amen. [Romans 11:33,36 (NLT)