A MATTER OF PERSPECTIVE

When I was with the Jews, I lived like a Jew to bring the Jews to Christ. When I was with those who follow the Jewish law, I too lived under that law. Even though I am not subject to the law, I did this so I could bring to Christ those who are under the law. When I am with the Gentiles who do not follow the Jewish law, I too live apart from that law so I can bring them to Christ. But I do not ignore the law of God; I obey the law of Christ. [1 Corinthians 9:20-21 (NLT)] 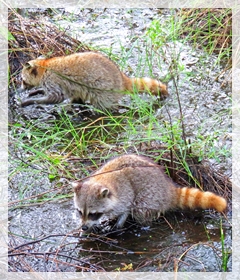 Like the rest of the east coast, Florida had a cold spell last week. With a temperature of 40, the weatherperson warned of a windchill of 36. Cautioning about the hazardous weather, she suggested that small children and animals stay indoors. That same morning, our son’s family in the north woke to -4 with a windchill of -20. For them, it was just another cold winter morning. They calmly bundled up the kids and walked them to school as they do every day. What a difference of perspective 1,400 miles makes!

How we view the world around us often depends on how it affects us. We were enjoying the antics of a pair of raccoons as they dug in the water for snails and crayfish when we heard, “Where’s my rifle now that I need it?” Stunned by such a negative reaction to what was an “Aha!” moment for us, we turned to look at the speaker who explained his vehement reaction to these engaging animals. To this farmer from Iowa, raccoons are masked marauders who wreak havoc with his corn crop and in his hen house. One person’s pleasure easily can be another’s pain in the neck! Where we saw two of God’s delightful creatures, he saw only destructive pests and I had to concede he made a good point.

Before meeting Jesus on the road to Damascus, the Apostle Paul was a devout Jew. As a Pharisee, he carefully abided by every one of the Torah’s 613 commandments. Gentiles, however, didn’t abide by the restrictive Jewish laws. They shaved their beards with a razor, didn’t recite the Shema (a Jewish prayer) twice a day, didn’t wear tefillin on their heads and arms or have tzitzit on the corners of their robes, made no distinction between kosher and non-kosher, and didn’t follow a host of other rules about food, work, and clothing. When Paul met with them, he didn’t go into their homes and tell them how wrong they were. He didn’t insist they keep kosher, add tassels to their robes or put mezuzahs on their door posts. Knowing that Christ had freed the Jews from the Torah’s regulations, the only law about which Paul was concerned was the law of Christ. Understanding the Gentiles’ different point of view, Paul respected it and lived their way with them. On the other hand, Paul also respected the perspective of the Jews. Having always followed the strict ritual observances of the Torah, he knew they’d be disturbed to see him break from any of them. When with the Jews, Paul followed their traditions, probably recited the Shema, and refrained from eating pork, shellfish, or milk and meat together. That didn’t make Paul a hypocrite—he openly admitted the way he changed behavior depending on his company. It simply meant that, rather than being judgmental, he respected others enough to look at things from their viewpoint. With each group, he found common ground in Jesus Christ. When we take the time to see the world from someone else’s perspective, we might just learn something; I know we’d be better evangelists!

Yes, I try to find common ground with everyone, doing everything I can to save some. I do everything to spread the Good News and share in its blessings. … So whether you eat or drink, or whatever you do, do it all for the glory of God. Don’t give offense to Jews or Gentiles or the church of God. I, too, try to please everyone in everything I do. I don’t just do what is best for me; I do what is best for others so that many may be saved. [1 Corinthians 9:22b-23, 10:31-33 (NLT)]