When the Woman saw that the tree looked like good eating and realized what she would get out of it—she’d know everything!—she took and ate the fruit and then gave some to her husband, and he ate. [Genesis 3:6 (MSG)] 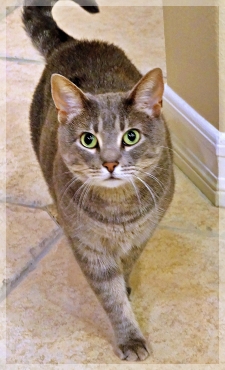 I often wonder why Eve ate that forbidden fruit and why Adam so foolishly followed suit. Of course, we have the clever, devious and deceitful serpent to blame. Assuring Eve that God lied to her, he said she wouldn’t die if she ate the apple. He promised that she’d be just like God with the knowledge of good and evil. God hadn’t given Adam and Eve any reason to doubt His word, so why did they succumb so easily to Satan’s temptation?

It certainly wasn’t hunger that led them to that forbidden fruit; they lived in Eden where everything was good and all of their needs were met. The two already had the knowledge of all that was good so why were they so interested in learning about evil? The serpent, however, piqued Adam and Eve’s curiosity. Seeing that lovely tree with luscious looking fruit, they got inquisitive. Why did God forbid that fruit? What would happen if they ate it? What did it taste like? Who would know? What was evil? What was death? What would it be like to have that knowledge—to know everything? Curiosity tugged at the two of them and they started yearning for what wasn’t theirs to have.

Curiosity was given to us by God and it is a beautiful gift. It makes us wonder what lies beyond and question what things are made of, how they work, and how they can be used. It causes us to ask, “What would happen if…?” Curiosity moved mankind forward in an amazing and awesome way and, without it, we wouldn’t have things like the wheel, electricity, solar energy, computers, vaccines, telescopes, or space travel. As William Arthur Ward said, “Curiosity is the wick in the candle of learning.”

Along with being that wick in the candle of learning, however, curiosity can be a double-edge sword. While it’s what makes a child explore and ask “Why?” it’s also what makes him stick a fork in an electric socket, swallow button batteries, and bite into detergent pods. Curiosity sent the Magi to Bethlehem and the shepherds to the manger but it also caused Adam and Eve to disobey God. It was curiosity that caused the Ethiopian eunuch to ask Philip to explain Isaiah but it also caused the prodigal son to explore a profligate lifestyle.

Untamed curiosity can make us vulnerable to the enemy’s attacks. It was curiosity that caused David to watch Bathsheba from his rooftop and lust for what wasn’t his to possess and curiosity made the men of Beth Shemesh peek in the Ark at what wasn’t theirs to see. Curiosity asks, “What’s the harm in one taste…one touch…one sip…one try…one time…one look?” Remember, Lot’s wife took just one inquisitive look back at Sodom and it didn’t end well for her.

“Where would we be today if no one got curious?” asked the teacher. “In the Garden of Eden!” answered the little boy. When curiosity leads us to be displeased with the wrongs of the world, it is a blessing. But, when curiosity leads us to be discontented with the blessings we have, as it did with Adam and Eve, it only leads to trouble. Curiosity isn’t a sin but what we do with it can be! Like free will, curiosity is a God-given gift but, like free will, it must be used with caution. The choice is ours.

Curiosity is a kernel of the forbidden fruit which still sticketh in the throat of a natural man, sometimes to the danger of his choking. [Thomas Fuller]

When God, your God, cuts off the nations whose land you are invading, shoves them out of your way so that you displace them and settle in their land, be careful that you don’t get curious about them after they’ve been destroyed before you. Don’t get fascinated with their gods, thinking, “I wonder what it was like for them, worshiping their gods. I’d like to try that myself.” [Deuteronomy 12:29-30 (MSG)]