The next day John saw Jesus coming toward him and said, “Look! The Lamb of God who takes away the sin of the world! He is the one I was talking about when I said, ‘A man is coming after me who is far greater than I am, for he existed long before me.’” [John 1:29-30 (NLT)] 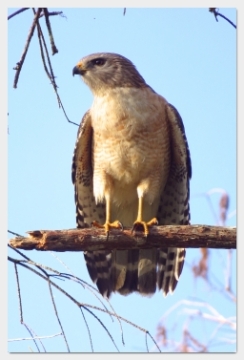 A red-shouldered hawk soared through the sky, swooped down, and settled in a tree just a few feet from us. After getting a photo, I walked back to a man we’d passed earlier on the boardwalk. His tripod and huge lens told me he was hoping to get some good shots and I let him know a Kodak moment was waiting on the side trail. He followed me back and my husband pointed out the impressive bird perched above him.

Later, we came upon one of the sanctuary’s naturalists who admitted she’d been waiting for someone to come along so she could point out a limpkin. With its dark brown body and white speckles, the bird blended into the underbrush and we never would have seen him without her direction. Then, opening a small jar of pond water she’d collected, she pointed out two dragonfly nymphs swimming around. Walking on, my husband pointed out an anhinga high in the trees and I returned the favor when I spotted a black-crowned night heron across the lake. Seeing the naturalist coming toward us, I waited so I could show her the easily missed bird.

When people come to the bird sanctuary, they come to see the swamp’s flora and fauna. But, if they don’t know where to look, it’s easy to miss the things that make the walk worthwhile. The naturalists often leave signs indicating points of interest and, when the ghost orchid is blooming, they leave a scope focused on the rare flower. Bird lovers share their findings on various bird websites and last week, after such a posting, dozens of birders turned up hoping to catch a glimpse a Hammond’s flycatcher.

John the Baptist was surrounded by a crowd of people who’d come to be baptized and hear him preach. Can you imagine what it was like when John saw Jesus and, pointing to the Lord, identified Him as the Lamb of God? Did all the heads turn and look? John’s job was to prepare the way and point the people to Jesus, the promised Messiah, and he did his job well.

While I’m happy to point out hawks, herons, swamp lilies, alligators and scarlet hibiscus to visitors at the bird sanctuary, I have another more important job that is shared with every Christian. Just as John pointed to the living Christ, we are to point to the risen Christ! But, I’m not sure pointing is enough. Had we just pointed in the hawk’s direction, the photographer might have ignored us and, if the naturalist had merely pointed toward the limpkin, we wouldn’t have seen it. It was only when she told us what to look for and described his location that we saw the bird. It seemed like her jar was filled only with murky swamp water until she showed us the nymphs and explained what they were.

When people come to the bird sanctuary, just knowing there are wood storks, herons, painted buntings, and old growth cypress isn’t the same as being shown those things. With our words, we can point people to Scripture, the church, and Jesus. Better than that, however, is showing people how the words of Scripture apply, what the church means, and how Jesus’ followers live a life of peace, joy, patience, forgiveness, love, compassion and service. It is by living the way we say we believe, by loving and serving, by praying both for and with someone, by seeking and interacting with the lost, by sharing our stories, and by listening to theirs that we truly show people the Lamb of God.

Birders are so enthusiastic that they share their sightings with everyone. Are we that enthusiastic about Christ? Like John, are we witnesses to His light? Do we show the Way?

If someone claims, “I know God,” but doesn’t obey God’s commandments, that person is a liar and is not living in the truth. But those who obey God’s word truly show how completely they love him. That is how we know we are living in him. Those who say they live in God should live their lives as Jesus did. [1 John 2:4-6 (NLT)]