Here is another story Jesus told: “The Kingdom of heaven is alike a farmer who planted good seed in his field. But that night as the workers slept, his enemy came and planted weeds among the wheat, then slipped away. When the crop began to grow and produce grain, the weeds also grew.” [Matthew 13:14-16 (NLT)] 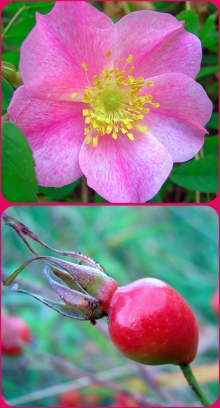 Our brief return north last June meant we again enjoyed walking among the Midwest’s summer wildflowers. I only stepped a few feet off the path for a photo and yet my pants were covered with sticky seedpods from the Tick-Trefoil. Sometimes called sticktights or beggar’s lice, their seed pods are covered with fine hooked hair that catches on anything it contacts—whether clothing or a passing squirrel. I spent the rest of the walk picking off the pods and scattering them along the trail. After carefully stepping over a pile of seed-studded raccoon poop, I was reminded that a flower’s purpose isn’t merely to look pretty; it’s to spread its seeds any way it can.

Like the Tick-Trefoil, some flowers have pods that attach to clothes and animals and ride through the forest on pants’ legs and fur until they find a good home. Flowers like the False Solomon’s Seal and Pokeweed, however, produce fruit that is eaten by animals and, like that raccoon, leave the seeds behind in their waste. Other wildflowers, like the Asters and Milkweed, have seeds attached to a feathery sort of “parachute” that is blown away by the wind to (hopefully) land on fertile soil. That the flowers are rooted into the ground doesn’t seem to keep them from spreading their seeds every which way to make more of their kind.

Looking at the colorful blossoms throughout the park, I saw that the native wildflowers have done their seed-spreading job well. Unfortunately, undesirable invasive species like Canadian Thistle and Purple Loosestrife also have been expanding their territory. The seeds of these invasive weeds are trying to defeat the native wildflowers in the same way Satan is trying to defeat us by planting his seeds of evil. So far, the flowers are ahead of the game; are we?

Jesus also told a parable about a farmer who planted seeds and the various kinds of soil on which his seeds fell. Types of soil, however, make no difference if the farmer fails to sow any seeds! Unsown seeds will never germinate! Would that we Christians were as determined to spread God’s word as the flowers are to scatter their seeds. As pretty as it is, the Prairie Rose knows that its job isn’t finished when it blooms into a beautiful flower. Its real purpose is to bear fruit (the rose hip) and spread its seeds far and wide. Unlike the rose, however, many Christians are quite content just looking good and give little thought to bearing fruit, let alone enlarging God’s garden by sowing His word.

It’s what you sow that multiplies, not what you keep in the barn! [Adrian Rogers]

He said to his disciples, “The harvest is great, but the workers are few. So pray to the Lord who is in charge of the harvest; ask him to send more workers into his fields.” [Matthew 9:37-38 (NLT)]