Listen closely to my prayer, O Lord; hear my urgent cry. I will call to you whenever I’m in trouble, and you will answer me. [Psalm 86:6-7 (NLT)] 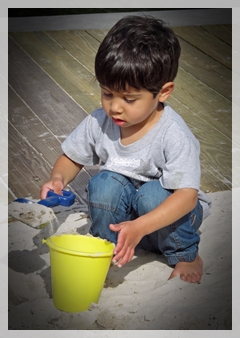 Once upon a time, a little boy was busy digging in the sand at the beach and, like other youngsters through the years, he thought he even might be able to dig all the way to China. His steadfast excavations got so deep that he encountered a large rock. With great determination, he dug and dug with his small shovel in an attempt to free it from the ground. Unfortunately, the little boy and his plastic shovel were no match for the rock. When the shovel broke in two, the boy let out a howl and burst into tears. Hearing the child’s cries, his father immediately ran to comfort him. Through his sobs, the boy told how he’d tried and tried to free the rock but was too weak, his arm was too short, and he’d broken his only shovel. His father gently asked why he hadn’t used all of his strength. “But I did, Daddy, I really did!” exclaimed the boy. “No, son, you didn’t,” explained the man as he reached into the hole, grabbed the rock with his large hands, and pulled it from the ground. “You should have called me!”

While the circumstances and challenges are different, we’re really not much different than that little boy. Determined to be self-sufficient and strong, we often fail to call on our Heavenly Father to help with the heavy lifting. I’ve never sobbed at the beach while holding a broken shovel but I’ve sat in despair and hopelessness in plenty of other places and cried because I thought I was at the end of all my resources. That’s usually when I complain to God with some version of why: why this, why now, why here, and (my personal favorite) why me? While God rarely offers an answer to the whys, perhaps it’s simply that trials exist to drive us to God: to trust in Him and call on Him in faith.

During David’s reign, Israel suffered from a three year famine and David prayed to God about it. When God told David the famine was because Saul had dishonored a covenant Joshua made with the Gibeonites, the king took rather gruesome steps to make amends and, apparently, the famine ended. [2 Samuel 21] Famine in Israel, an agricultural society, was a grave matter and I can’t help but wonder what King David was doing during the three years of scarcity before he finally fell to his knees and consulted God. Why didn’t he pray at the first sign of trouble rather than waiting until the people were starving? Could pride have made David think that he and his advisors could solve a food crisis on their own? If so, that pride caused his people to suffer for three years simply because he didn’t use all the strength available to him by calling on his Father!

Ours is not a God of Last Resorts! He is not where we go when all else fails: when the shovel breaks or the grain bins are empty. Ours is a first responder God! He’s the first call we make when we see the rock that seems immovable, discover insects infesting our fields, or see challenges looming on the horizon. With His power, we can do things we could never accomplish by ourselves. Let us be strong in the Lord!

We tend to use prayer as a last resort, but God wants it to be our first line of defense. We pray when there’s nothing else we can do, but God wants us to pray before we do anything at all. Most of us would prefer, however, to spend our time doing something that will get immediate results. We don’t want to wait for God to resolve matters in His good time because His idea of ‘good time’ is seldom in sync with ours. [Oswald Chambers]

He gives power to the weak and strength to the powerless. … But those who trust in the Lord will find new strength. They will soar high on wings like eagles. They will run and not grow weary. They will walk and not faint. [Isaiah 40:29,31 (NLT)]