Jacob was the father of Joseph, the husband of Mary. Mary gave birth to Jesus, who is called the Messiah. [Matthew 1:16 (NLT)]

Jesus was about thirty years old when he began his public ministry. Jesus was known as the son of Joseph. Joseph was the son of Heli. [Luke 3:23 (NLT)] 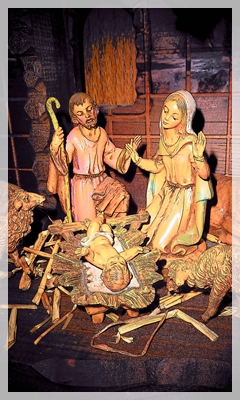 Writing about the genealogy of Jesus, as I did yesterday, posed a bit of a conundrum. While both Luke and Matthew establish that Jesus is of the house of David, meaning He fulfills the Messianic prophecies, their lists don’t match. It’s not just that Matthew begins with Abraham, goes forward, mentions women, and skips a few generations while Luke starts with Jesus and goes all the way back to Adam. Matthew’s genealogy traces Jesus’s ancestry to David’s son Solomon but Luke’s traces it to David’s son Nathan. They are, however, in agreement in acknowledging the virgin birth; neither genealogy states that Joseph was Jesus’s blood father. Matthew simply calls him Mary’s husband and Luke says that people thought Joseph to be the father of Jesus.

Nevertheless, when genealogy and all those “begats” seem so important in Scripture, what explanation is there for such discrepancies? Most biblical scholars theorize that we are given two different but accurate lines of ancestors. Some say Matthew gives Jesus’s official (paternal) one through his legal father Joseph and Luke gives us His actual (maternal) one through his mother Mary. After all, Joseph was Jesus’s father in name only. While giving a mother’s lineage was unusual, so was a virgin birth! Since there was no Greek word for “son-in-law,” they suggest Joseph was the “son” of Heli through his marriage to Mary who was Heli’s daughter. That both Joseph and Mary could trace their lineage to David is not so unusual; apparently, it was customary (but not required) to marry within your tribe. Since there is no mention of Mary having brothers, she could inherit from her father if she married within her tribe. Some scholars propose this was the case and that Joseph became Heli’s heir by virtue of his marriage to Mary and, therefore, he actually had two genealogies.

On the other hand, I read several articles positing that Luke’s genealogy actually is that of Joseph and Matthew’s is Mary’s! Some scholars believe “the husband of Mary” is a mistranslation of the word aner and should read that a man named Joseph was “the father of Mary.” Giving support to this argument is that, along with mentioning Mary, Matthew also mentions four other women while, in his genealogy, Luke never even mentions her.

Over 2,000 years ago, they didn’t have Ancestry.com or 23andMe kits and we have neither Matthew nor Luke to explain. As a result, even the most knowledgeable biblical scholars merely can speculate about these two lists. As a layperson, I simply ask myself whether small inconsistencies or unanswered questions in the gospels make a difference to me. Whether one or both lists are accurate does not weigh heavily on my belief. Remembering the phrase that “a chain is only as strong as its weakest link,” I don’t base my faith equally on the exactness of every word in the Bible but rather on the truth of the sum of its words and the importance of their message. I firmly believe that Jesus fulfilled the Messianic prophecies and was from David’s line; whether he did that through Nathan or Solomon really doesn’t matter. What matters is that “the Son of Man came to seek and save those who are lost.” [Luke 19:10]

“For the time is coming,” says the Lord, “when I will raise up a righteous descendant from King David’s line. He will be a King who rules with wisdom. He will do what is just and right throughout the land. [Jeremiah 23:5 (NLT)]

You will conceive and give birth to a son, and you will name him Jesus. He will be very great and will be called the Son of the Most High. The Lord God will give him the throne of his ancestor David. [Luke 1:31-32 (NLT)]