Moses remained there on the mountain with the Lord forty days and forty nights. In all that time he ate no bread and drank no water. And the Lord wrote the terms of the covenant—the Ten Commandments—on the stone tablets. [Exodus 34:28 (NLT)] 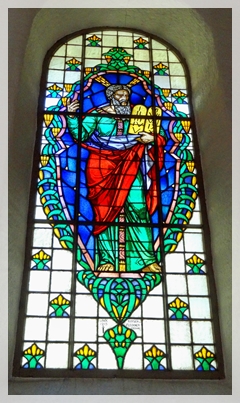 I ran into trouble while writing yesterday’s devotion. To double check myself when referring to the commandment about honoring parents, I reached for my copy of Martin Luther’s Small Catechism which said it was the fourth commandment. Since that just didn’t seem right, today I reached for my Book of Common Prayer; there I found honoring parents at number five! Of course, the obvious solution was to check the source—the books of Exodus and Deuteronomy. For once, however, the Bible didn’t have the answer! Three places in Scripture tell us there were ten commandments but nowhere in Scripture are they numbered. Moreover, since verse numbers were added in the 16th century, they’re of no help. Clearly, a little research was in order.

The assigning of numbers to the commandments developed over the centuries as a way of making them easier to teach and learn. Around 220 AD, the Biblical scholar Origen of Alexandria numbered the commandments in the way familiar to most Protestant and Orthodox Christians. “You shall have no other gods before me,” and “You shall not make for yourself an idol…” are two separate commandments and not coveting your neighbor’s wife or anything else that belongs to him are combined to form the tenth commandment. In the fifth century, Saint Augustine numbered them so that the prohibitions about other gods and idols are combined into the first commandment. He then split coveting a neighbor’s wife and coveting his goods into two commandments. Generally, Roman Catholics and Lutherans follow Augustine’s system.

Since Martin Luther was a Roman Catholic monk before starting the Protestant Reformation, Augustine’s numbering was the way he’d learned the commandments which explains why honoring parents is number four in his Catechism. My Episcopalian prayer book uses the Origen numbering, making the commandment about honoring parents number five. Without the original tablets, we’ll never know which is correct. Far more important than how they are numbered, however, is what those commandments meant to the Israelites and what they mean to us today. The first three or four (depending on your denomination) have to do with mankind’s relationship to God. They lay out our obligation to honor our Creator. The next seven or six (again depending on your denomination) have to do with the obligations we have to one another in family and society and lay out the foundation for building a community. Rather than worrying about how to number the ten, perhaps we should make a greater effort to live the two spoken of by Jesus!

I know the two great commandments, and I’d better get on with them. [C.S. Lewis]

“Teacher, which is the most important commandment in the law of Moses?” Jesus replied, “‘You must love the Lord your God with all your heart, all your soul, and all your mind.’ This is the first and greatest commandment. A second is equally important: ‘Love your neighbor as yourself.’ The entire law and all the demands of the prophets are based on these two commandments.” [Matthew 22:36-40 (NLT)]

P.S. In spite of attending a Lutheran church when we’re north, I was raised in the Episcopal church and am most comfortable with the Protestant/Orthodox numbering of the Ten Commandments. With apologies to my Lutheran and Catholic readers, when writing about them, I will number the Ten Commandments as I did when a girl.